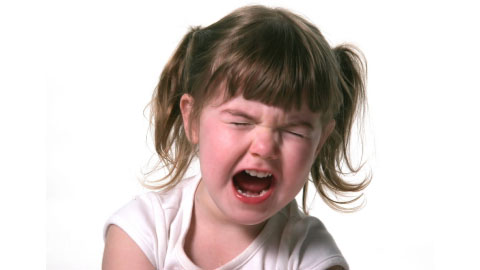 If anybody knows a thing or two about temper tantrums, it’s this lady typing right here.
I am fully convinced that I have a diva on my hands. Don’t get me wrong, my Ava is a big sweetheart and she can be a really good girl, but what toddler doesn’t go through their share of tantrums?
Last weekend we were grocery shopping (which is not easy lately), and a hungry and fussy 2.5 year old wanted to walk instead of sit in the grocery cart. We let her walk for a little but but we know how that will pan out. She will get hyper and want to grab everything she sees and run quickly away from you.
When the running started, we tried to place her back into the grocery cart so we can finish up the groceries, but she was not having it. Not one bit. You can guess how that ended.
The only thing that calmed her down was a Kinder Surprise Egg (usually what does every trip to the grocery store).
The last serious meltdown was in the parking lot of a very hectic Walmart (I was already sweating bullets during checkout, this was the icing on the cake).

Ordinarily, the great thing about having a toddler is watching her develop her sense of self. That, however, includes the discovery that she has a will of her own. And where there’s a will, there’s also a won’t. The good news: Resistance is not only normal, it’s healthy (it’s your kid gaining confidence, learning independence, and figuring out who she is). The better news: There are tricks for guiding her to a more cooperative attitude. We’ve rounded up some of the best for five of the most frustrating toddler tussles you’re likely to face:

“My toddler won’t let me buckle him into his car seat.”

Worth a battle?
Absolutely. Buckling isn’t just the law, it’s a matter of life or death. Keep your toddler in a five-point-harness seat as long as possible. They’re safer, and harder to unfasten in mid ride.

Tactics to try: Keep it light.
“I make games out of things that they must do,” says Harrisburg, NC, mom Shannon Mathews of her four kids, including 2-year-old twins. “We make it a race to see who can get buckled into their car seat first.” Distracting play, like silly songs or goofy faces, works, too. “If I have just the babies, I make them laugh as I’m strapping them in so they forget what I’m doing, and then I quickly give them each a toy off the floor of the van — there’s always a toy on the floor of our van!”

Bribe them, pure and simple.
One snowy winter when Ann Nibbio, a mom of three, was repeatedly having a hard time getting her brood into their car seats, she stashed a bag of chocolate kisses in the glove compartment. “On the way to the car, I’d say, ‘Hey! I just remembered those kisses in the car. You can have one when you’re all buckled up.'”

Worth a battle?
Nah, says psychologist Debbie Glasser, Ph.D., founder of Newsforparents.org. “I don’t recommend forcing toddlers to kiss relatives. That approach tends to backfire and make children less likely to greet their relatives and more likely to make a scene.” Anyway, a coaxed hug is seldom sincere — which misses the point in the first place.

Tactics to try: Warn your kid.
A better way is to prep her so she’s not put on the spot: “Aunt Linda is coming to dinner tonight. She’d love a big hello!” Then, before you answer the door, prompt her: “Aunt Linda loves hugs, but even if you just smile, she’ll be so happy to see you!”

Demo your own PDAs.
Nibbio’s father resides in an assisted- living facility, where his fellow residents sometimes ask her toddler for a kiss. “I just laugh and say, ‘She doesn’t give kisses, but I do’ — and then I plant one on the person’s cheek.” Seeing you give hugs and kisses may help her become comfortable with the idea down the road.

“My tot won’t let me brush her teeth.”

Worth a battle?
It depends on your feelings about dental hygiene. I personally never brushed a single one of my kids’ teeth, although I gave each child a soft brush and modeled the general idea. But I stopped short of forcing the issue or using timers, or even having them open wide so I could do all the work myself. Maybe I just got lucky, but I found that with enough praise and by emphasizing the fact that they got to gargle and spit (both fun), the job got done. Pediatric dentists, however, recommend twice-a-day brushing from infancy, and say you should lend a hand until at least age 5 or 6.

Tactics to try: Blame someone else.
That’s how Suellen Durdaller navigates must-do situations with her daughter. “I tell Alysa, ‘The dentist says you must brush your teeth.’ This takes the pressure off me. I just state it as a fact and move on,” says the Downingtown, PA, mom of three.

Sidestep the “no.”
Being matter-of-fact can be useful, says Glasser. “Instead of making a request that requires a ‘yes’ or ‘no,’ try rewording it to pull the response you’re looking for.” Don’t ask, “Ready to brush your teeth?” Instead, say, “It’s toothbrushing time. Will this be a red-brush day or a yellow-brush day?”

Worth a battle?
A small one. Toddlerhood is often a period of strong preferences and weird food jags (okay, picky eating), and that’s fine — within reason. Even if your child is ona veggie boycott, there’s no need to panic. Odds are his food choices will balance out over time, says Marilyn Tanner-Blasiar, R.D., a pediatric dietitian at the Washington University School of Medicine, in St. Louis. Which isn’t to say you shouldn’t keep (subtly) working on getting him to acquire a taste for green (and red, orange, and yellow) things.

Tactics to try: Make it a raw deal.
Most veggies taste stronger when they’re cooked, which is why most little kids prefer theirs straight out of the crisper (or lightly steamed). Serve yogurt or salad dressing for dipping matchstick-cut carrots, peeled celery, edamame (soy beans), and broccoli “trees.”

Fall back on fruits.
To balance an overall diet, pick fruits, particularly those high in vitamins A (cantaloupes, apricots, mangoes) and C (oranges, strawberries, kiwis). A multivitamin may ease your mind, too; ask your pediatrician.

“My child won’t come when I call.”

Worth a battle?
It’s not realistic to expect a 2-year-old to abandon, say, the close study of the TV remote that he’s conducting just because you tell him to. That said, you don’t want to be at the utter mercy of his whims. “When you repeatedly call but your child doesn’t show up until he’s ready, you’re actually teaching him to ignore you,” says Elizabeth Pantley, author of The No-Cry Discipline Solution and a mom of four.

Tactics to try: Make it sound worth the trip.
When 17-month-old Isabella Covert of Wauwatosa, WI, is in a run-the-other-way mood, her mom, Juanita, pours as much excitement into her tone of voice as she can. “Then I’ll scoop her up to show her I’m happy she’s with me.” At home, Covert sometimes lures Isabella by waving a puppet or playing a musical toy and dancing.

Count down.
“Instead of calling ‘Come here now!’ give two warnings,” says Pantley. In the toy store, I might have tried “Page, you’ll need to come in five minutes.” And then, in five minutes, “Page, please come now.” Pantley suggests waiting a minute, and if your child still doesn’t respond, taking him by the hand and saying, “When I call, I expect you to come.”A toddler can’t tell time but will quickly catch on to your progression of heads-ups. (You can also say something like “Two more trips down the slide.”) It helps, Pantley adds, to let your child know you understand his point of view: “I bet you wish you could stay in this toy store forever, but it’s time to go now. Hug the toy doggy one more time. Now here are my keys to hold.” Warn, distract, have your way.

Of course, sometimes even your best efforts will still net a full Limp Noodle. But a little creativity and practice may spare you a steady diet of them.