Usually when logging onto Facebook, I see your typical updates from family and friends — quotes, updates about them being back-to-school broke, toddler just learned to potty train, “Is it Friday yet?”, what they are whipping up for dinner or how many km they ran that day and usually they come with pictures too including the sunset over Bora-Bora water or Eiffel Tower vacation pics that I so very much begrudge revel in.

Yesterday Monday morning, coffee in hand and ready to do some quick perusing and reading before the kids woke up, what I saw sprawled across my computer screen literally got my hands shaking.
This was what I read:
The person that wrote this and sent this to the family of a 13-year-old autistic boy was not only a woman claiming to be a fellow neighbour but also a mother.
It broke my heart thinking how the family must have felt reading this.
I’m a mom myself and although none of my children are special needs children, does it even matter?
As a mom, I can’t fathom the feeling of someone thinking and saying such hurtful things about my child — I would be so bereaved and absolutely outraged.
I shared the letter plus my thoughts on my Facebook Page and received a lot of feedback from readers that were clearly as dismayed and shaken up as I was.
Max’s Grandmother, Brenda Millson, was the one to receive the letter.
She said Max lives with his parents and older brother in Oshawa, Ont., but he had been visiting her home in Newcastle.
She said the author of the letter may have assumed she is Max’s mother.
“At first I couldn’t believe what I was reading,” she said, adding that she was shaking in disbelief.
“It’s just so sick.”
Durham regional police said they have been investigating since Friday and that they are taking the letter seriously.
Max’s mother, Karla Begley, 44, who is in a wheelchair with multiple sclerosis, said police told her they had never seen a letter “that despicable.”
The Crown Attorney’s Office in Ontario says the letter falls below the threshold for a hate crime, despite the hateful language, Durham Regional Police Service said in a release Tuesday.
However, police will consider whether the letter violates other Criminal Code issues.
Really? I would say it’s pretty hateful, threatening even.
But this, this at least made me smile.
On Sunday night, at least 120 people waited outside the home for more than an hour in order show their support, Begley said. Families with autistic children drove in from Oshawa to show their support.
“Max was high-fiving everyone. He didn’t understand but knew it was for him,” Millson said.
Begley said support for the family following the letter has been “bittersweet,” adding it’s too bad it took such a letter to bring attention to a special-needs child.
“It’s just a reminder, you know, you’ve got to treat these kids like they need to be treated,” Begley said. “They just want to belong.”
Anyone with any new information regarding the investigation is asked to contact Const. Thompson of the East Division Criminal Investigations Bureau at 1-888-579-1520 ext. 1604.
Anonymous tips can be made to Crime Stoppers at 1-800-222-8477 (TIPS) or at http://www.durhamregionalcrimestoppers.ca.
We don’t need Autism Awareness, we need Autism Acceptance.

I’d love to share a beautiful book from Chicken Soup for the Soul to one of my readers that are “Raising Kids on a Spectrum”. It offers 101 Inspirational Stories for Parents of Children with Autism and Asperger’s. 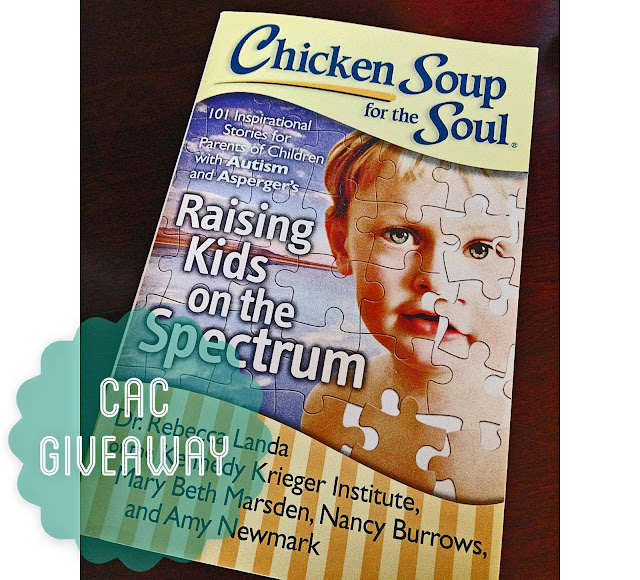 1) Simply ‘Like’ Carol Au Courant on Facebook and Leave a Comment underneath the Giveaway Photo above.
(Open to Canadian Residents only)
Contest ends September 1st.
****
Credits: http://www.cbc.ca,