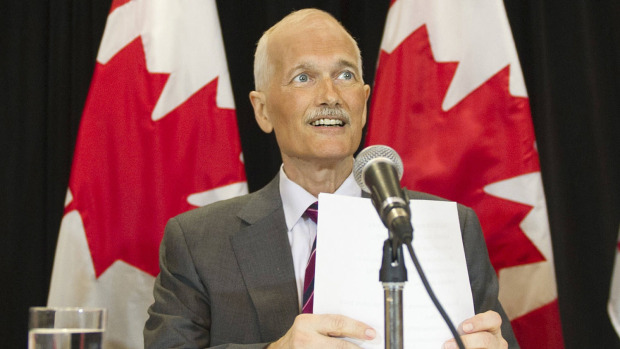 I’m not really much of a political individual, although my beliefs and votes were usually towards the Conservative Party. Considering I may not have agreed with his beliefs, I respected his opinion and found Mr.Layton to be such an honourable politician.  Not everyday will you come across a politician with such class, kindness and true leadership.
So today, whether we are left, right or centre it doesn’t matter. Jack cared deeply for people and was an important voice for Canadians. We will all miss him.
Condolences to his family and RIP to respectable man.

“We deeply regret to inform you that the Honourable Jack Layton, leader of the New Democratic Party of Canada, passed away at 4:45 a.m. today,” his family said in a statement.

“He passed away peacefully at his home surrounded by family and loved ones.”

The charismatic politician was felled by an unidentified but aggressive cancer that took hold this summer following a battle last year with the same disease in his prostate.

The latest diagnosis came in mid-July, barely a month after Layton and his wife Olivia Chow, a fellow NDP MP from Toronto, had made their historic move into Stornoway, the official Ottawa residence of the country’s Opposition leader.

“It’s just an incredible loss, not only for the NDP but all Canadians,” said NDPMPLibby Davies on Monday.

“I think people came to really love Jack, and they saw him as someone who had such courage, and commitment, to work for people, for a better Canada, for social justice,” she said.

“He humanized politics. People feel so cynical about politics and politicians, we all get a bum rap. And I think Jack’s enthusiasm — he just loved what he did.” 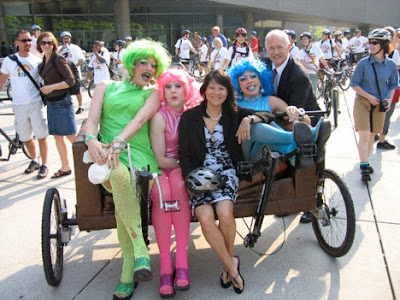 Jack and his wife, Olivia Chow, at the Pride Parade.

The greatest success of Layton’s 30-year political career — the historic NDP breakthrough in May’s federal election, catapulting his party into Official Opposition — was achieved, it is now clear, with time rapidly running out on his life.

That Layton’s moment of glory on the national stage was followed so swiftly by his death will leave chroniclers of Canadian political history forever pondering the what-ifs of a career cut short at such a promising point, and whether a man who unexpectedly became the country’s “prime minister in-waiting” earlier this year might one day have been able — as unlikely as it seemed mere months ago — to complete the journey to the pinnacle of power.

No social democrat had ever occupied the place (or even come close to doing so), and Layton’s arrival there on June 15 raised hopes among the NDP faithful that even greater achievements awaited the party under his leadership.

But by the time a thin and weary-looking Layton revealed on July 25 he’d been stricken by a second cancer, and that he would require a leave-of-absence to fight the illness “so I can be back to fight for families when Parliament resumes” in September, there were widespread doubts he’d be able to fulfil that promise or to direct his party’s ultimate quest: becoming Canada’s government in a future election.

Layton will not lead that charge. But he will be remembered — fondly by his supporters, respectfully by his opponents — for his effective, down-to-earth brand of progressive politics, and for his rise from the relative obscurity of Toronto’s municipal government to become, at least in electoral terms, the most successful national leader in the 78-year history of the CCF-NDP franchise.

If the NDP without Layton manages to cement its position ahead of the Liberals at the threshold of power, perhaps alternating with the Conservatives in forming future governments, he will also be credited with permanently changing Canada’s political landscape.

“If I have tried to bring anything to federal politics, it is the idea that hope and optimism should be at their heart,” Layton said in his last public address, delivered the day he disclosed his new battle with cancer.

“We can look after each other better than we do today,” the fiery speaker stated in a suddenly fragile, raspy voice. “We can have a fiscally responsible government. We can have a strong economy; greater equality; a clean environment. We can be a force for peace in the world.”

He remained, he added, “as hopeful and optimistic about all of this as I was the day I began my political work, many years ago.”

Politics for Jack Layton was both a destiny and an inheritance.

Before becoming NDP leader, he was best known as a headline-grabbing, left-wing councillor at Toronto’s city hall fighting for affordable housing, a greener environment, the triumph of community over corporate interests. But Layton — born in Montreal in 1950 and raised in the nearby anglo bastion of Hudson — came from a family of Quebec politicians with surprisingly conservative leanings.

And his political roots reach even deeper into Canadian history. His great-grand-uncle, William Steeves, was a Father of Confederation from New Brunswick and a founding member of the Senate in 1867, the year Canada was born.

Layton’s great-grandfather, Philip Layton, was an English immigrant who founded the Montreal Association for the Blind and championed the rights of the visually impaired.

“Even though I never knew my great-grandfather, I will not forget the stories handed down to me of his ability to organize and empower people,” Layton wrote in his 2006 memoir-manifesto Speaking Out Louder: Ideas That Work For Canadians.

Layton’s grandfather, Gilbert Layton, served in the Quebec cabinet of Union Nationale premier Maurice Duplessis before breaking from the conservative party to support conscription in the Second World War.

And Layton’s father, Robert, who died in 2002, was a Montreal-area Liberal activist in the 1960s and ‘70s before switching parties to become a Conservative MP from 1984 to 1993, serving as Brian Mulroney’s minister of mines and national caucus chairman.

Today, Layton’s son Michael is a Toronto city councillor, carrying on a rich family tradition of working in politics.

Educated in political science at McGill University, Jack Layton earned a PhD at York University in 1969 and went on to work as a professor of politics at Ryerson University in the 1970s.

He married his first wife, Sally Halford, in 1969, and the couple had two children — Mike and Sarah — before their divorce in 1983. He married Chow, then a Toronto school board trustee, in 1988.

Layton counted famed McGill philosopher Charles Taylor — who ran unsuccessfully for the NDP in Montreal in the 1960s — as a prime shaper of his world view. And Layton, originally a Liberal like his father, had described how Pierre Trudeau’s heavy-handed response to the FLQ Crisis in October 1970 led him to embrace the NDP and its leader, Tommy Douglas, who famously compared Trudeau’s imposition of the War Measures Act to “using a sledgehammer to crack a peanut.”

First elected to Toronto city council in 1982, Layton emerged as the leader of an influential NDP slate of municipal politicians. He headed the city’s board of health and served a host of other municipal bodies over the years, then ran unsuccessfully as the left-wing candidate for Toronto’s mayoralty in 1991.

He worked as a lecturer and environmental consultant before returning to Toronto council, then took a nationally prominent post as head of the Canadian Federation of Municipalities.

Layton lost twice as a federal NDP candidate in Toronto in the 1990s, but in January 2003 — with a crucial endorsement from party icon Ed Broadbent — succeeded Alexa McDonough as the national leader of the New Democrats.

Source and credits to Huffington Post and CTV News.