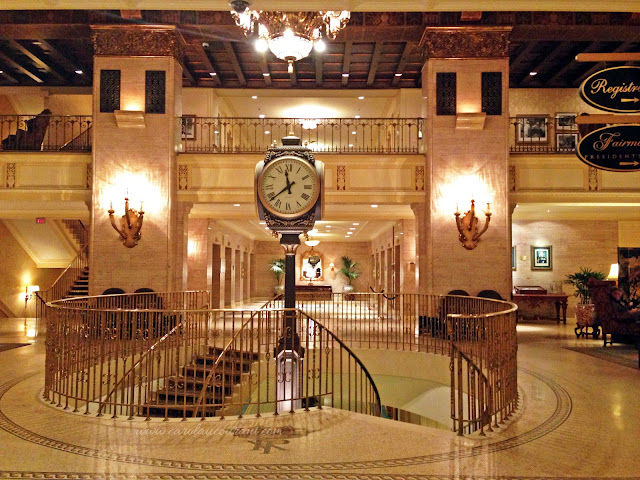 Ravishing and historic architecture, top-notch, superior service and wonderful accommodations and facilities, if you’re planning a stay in the beautiful city of Toronto, treat yourself lavishly at The Fairmont Royal York.

It’s not every day that I get the opportunity to “escape to the city” sans kids and enjoy some ME time and also time away with my husband. It’s not only a treat but it’s beneficial to your overall well being and your marriage getting that time to recharge and relax.

Everyone has heard and knows of the distinguished Fairmont name; I was lucky enough to get the opportunity to spend a night and discover one of the city’s oldest and premier luxury landmark hotel, the Fairmont Royal York. 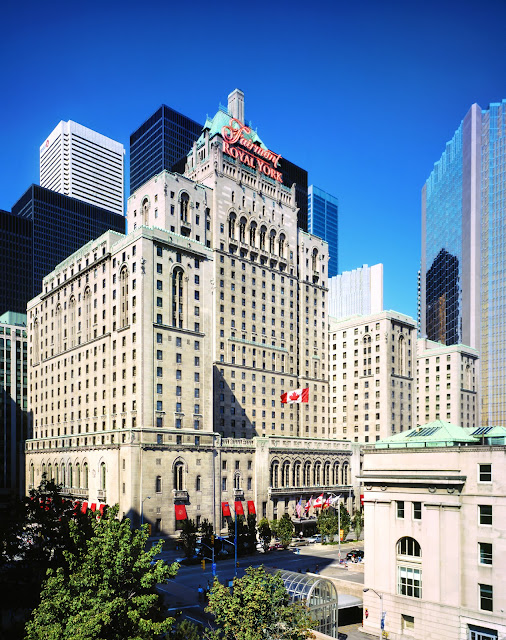 First opening it’s doors in 1929, after welcoming more than 40 million guests, The Fairmont Royal York continues to represent the epitome of hospitality.  Although the years have brought changes, many of the features are still intact – the magnificent hand painted ceiling, the travertine pillars, ornate furnishings, crystal chandeliers and wall hangings.  Guests walk where the rich and famous continue to walk and no. 9 elevator still carries illustrious guests such as Her Majesty Queen Elizabeth II. 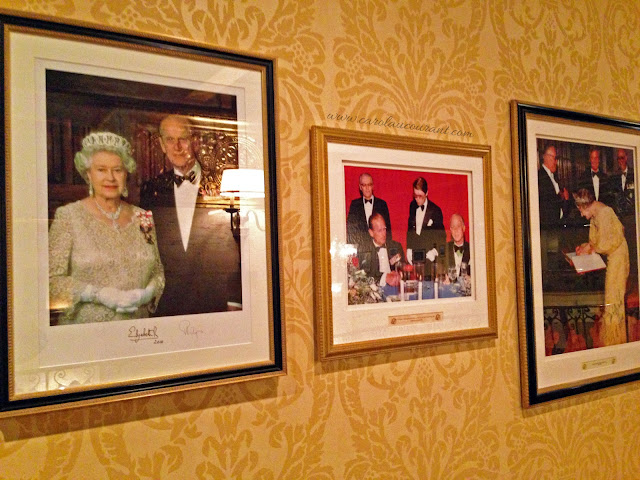 Another great thing about the hotel is it’s location.
Situated so conveniently right in the heart of downtown Toronto, The Fairmont Royal York is within walking distance to the business and theatre districts and the city’s best shopping and dining.
Nearby attractions include the CN Tower, the Rogers Centre, Hockey Hall of Fame, Chinatown, St. Lawrence Market, Harbourfront and the Air Canada Centre, Toronto’s busiest sports and entertainment complex.
Union Station, the subway and three kilometres and approximately 1,200 of shops and services are connected to the hotel by the city’s extensive underground system, the PATH walkway.

My night’s stay in the Fairmont Royal York included the Bed & Breakfast Package which included: One night accommodation in a Fairmont room, Breakfast for two in EPIC*, and Overnight Valet Parking for one vehicle.
This all-inclusive package starts at $195.00 CDN and in my opinion an amazing deal!
This package will be available until December 31, 2013.

Upon entering the valet parking, our attendant was quick and courteous. The bellman offered to take our luggage, although we were packed very light so did not require it. 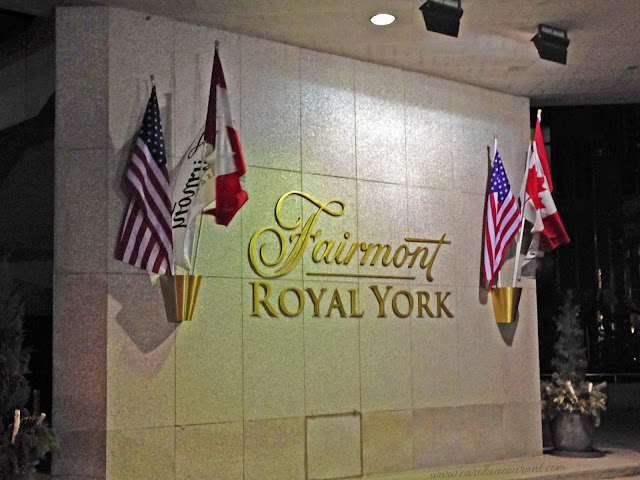 When checking-in at the Concierge Desk in the stunning main lobby, I was so impressed with how swift and friendly the concierge was.  All he required was my name and a credit card and everything else is basically taken care of for you.  Another big plus in this hotel which I believe to be very important is the check-out time. The check-out time is 12pm and we also receved a later complimentary check-out at 1pm.
That’s a good time! Usually many hotels have a standard check-out time for 10-11am which I always find to be too early. 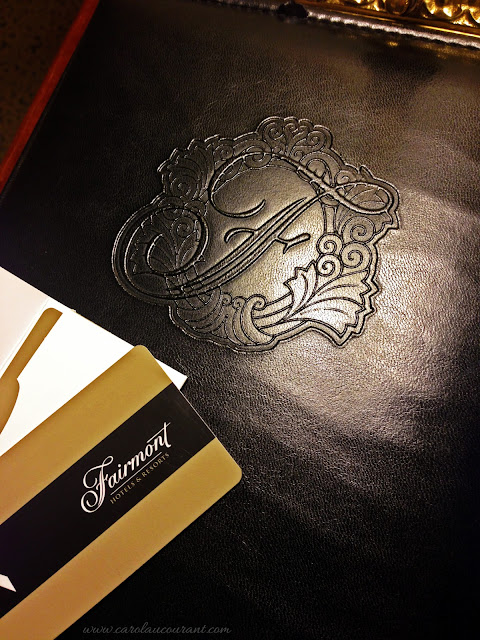 I wanted to stand in the main lobby for a little longer before heading to my hotel room just to admire the remarkable surroundings. Awe-struck; this historical hotel is simply breath-taking. This is the fabulous thing about old hotels — their architecture is incredibly ornate and elegant. 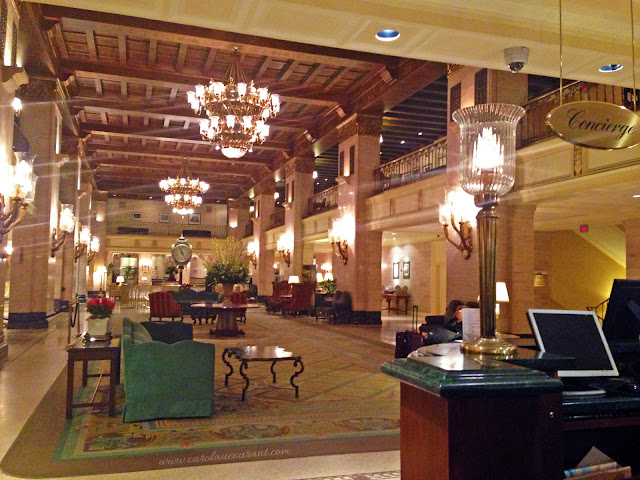 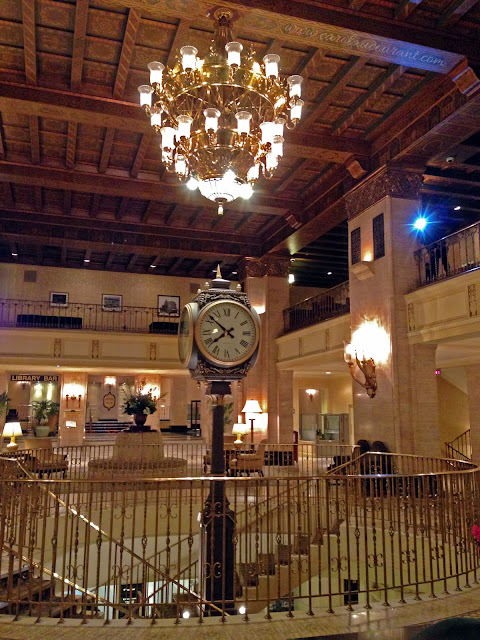 When entering our Deluxe Guest Room which offered a larger open-concept room, with a sitting area as well as a separate sleeping area.  It was so charming and commodious traditionally decorated with the comfiest king-size bed, a desk, and both rooms included an LCD TV with high-definition channels and express movies.
The bathroom was clean and included the comfiest bathrobe I’ve ever worn! So comfy in fact, I purchased one at the Fairmont Store before I left. They also had amazing bath product samples from the Le Labo® Rose 31 collection. 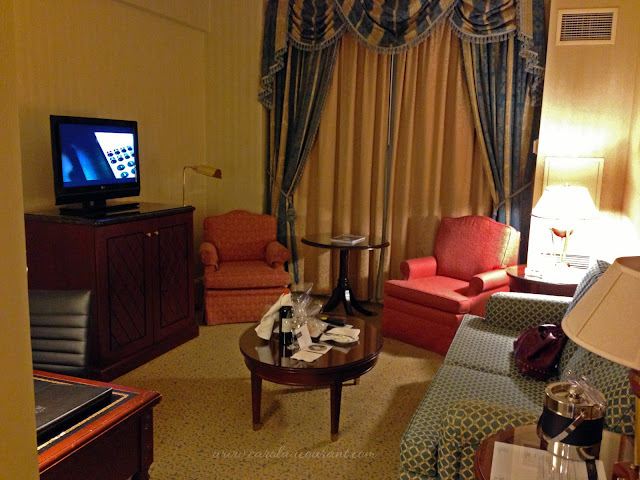 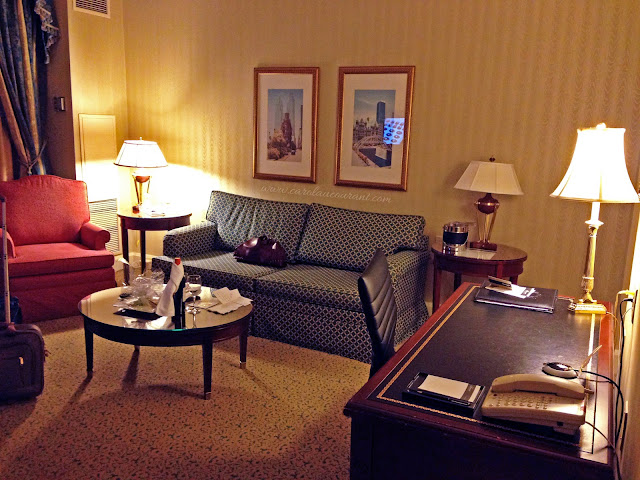 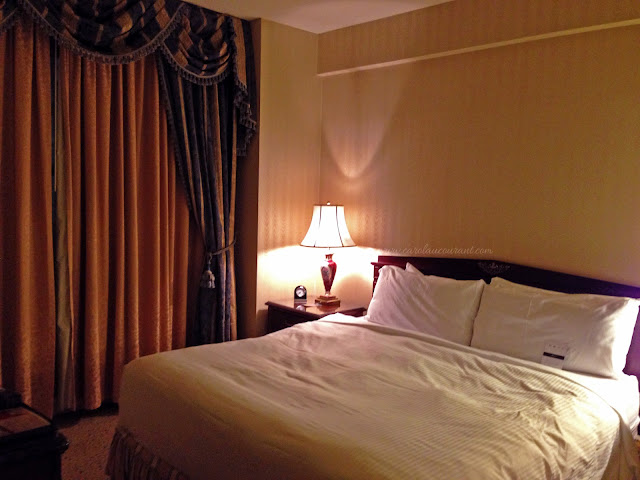 All guest rooms offer an array of common amenities and also amenities on request.

I was pleasantly surprised to see a little welcome spread waiting for me on the coffee table.
Such a nice thing to walk into after a long day.  I was ready to kick-back, pop open the wine and indulge in the delicious spread of fine cheeses, crackers and fruit.  This is reflective of the extra mile the Fairmont Royal York go to welcome and please their guests. This can be requested when booking a stay for whatever the special occasion may be. 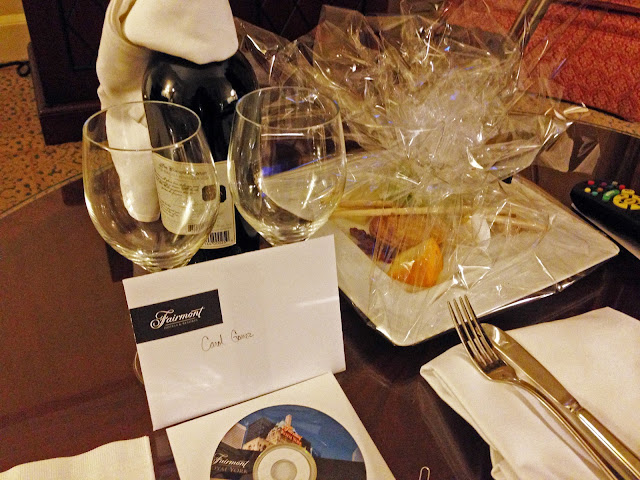 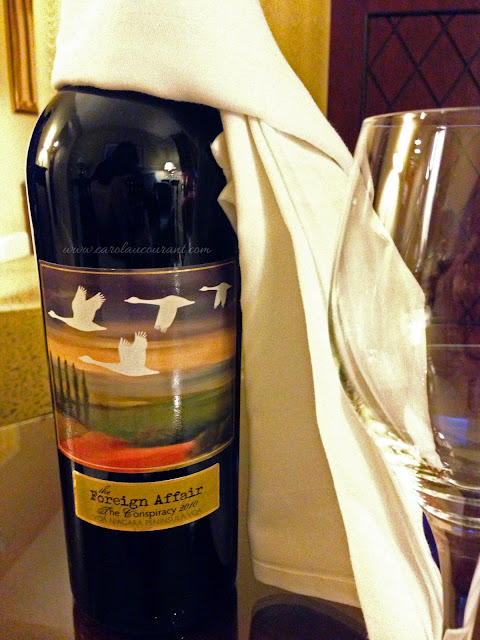 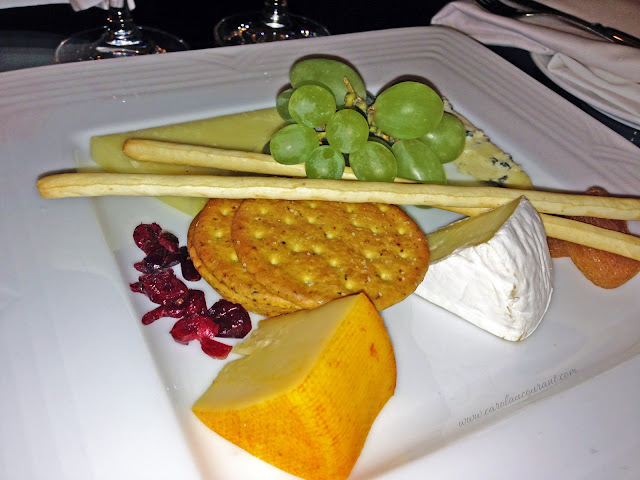 After a glass of wine, some cheese and relaxation, we decided to take a brief walk around the hotel before dinner.

After our stroll, we decided it was time for a late dinner.
We had many options to eat dinner around the hotel, such as their six restaurants located inside the Fairmont Royal York including EPIC, the hotel’s signature fine dining restaurant, Benihana, a Japanese teppanyaki steakhouse and sushi bar, a deli and Piper’s, a casual gastro pub with a wide selection of domestic and imported beers.
However, I wanted to get the full Fairmont Royal York experience, so I went with In-Room Dining.
Available 24 hours and offering choices for every taste and occasion. 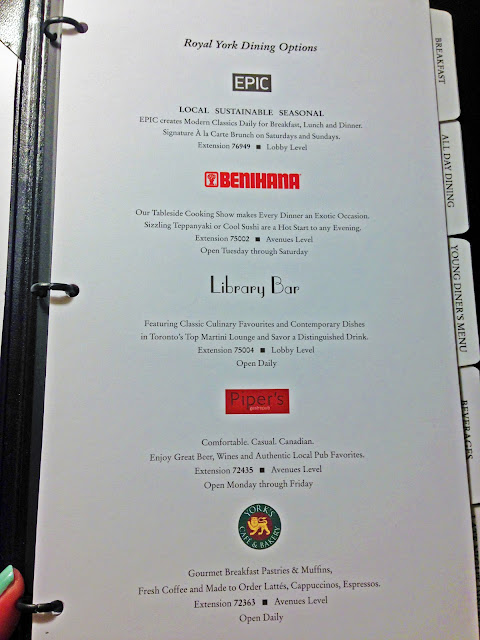 Our order came quickly and the waiter that brought our food to us also brought a round table complete with tableware and cutlery.
He pulled out my chair for me, prepared everything right before us and what I appreciated was that the glasses of water and even the small dishes with fresh butter and cheese was covered upon arrival to keep from anything getting into it during transport.  All in the details!
Not only was he professional and prompt, but kind and very accommodating.  I was thoroughly impressed! 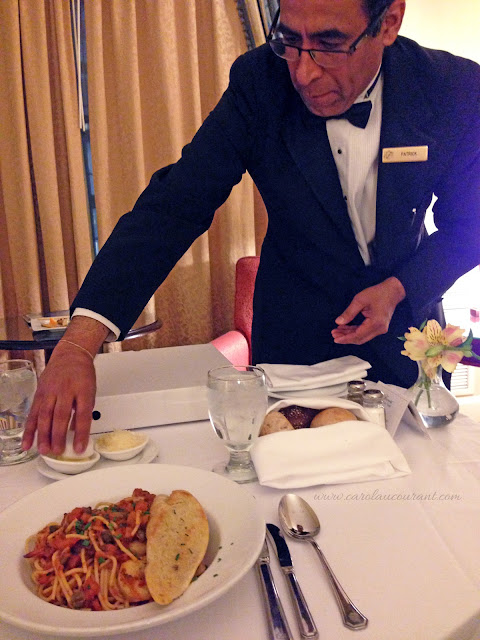 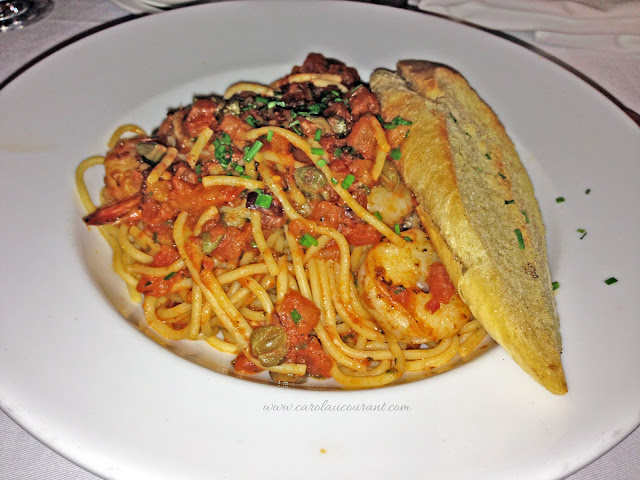 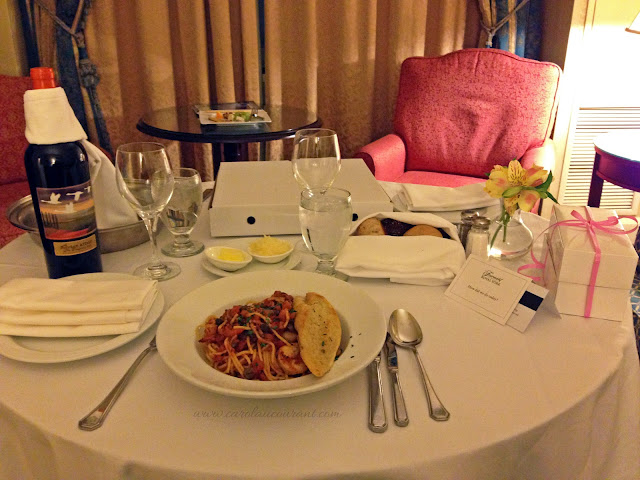 I ordered Linguini Putanesca with Shrimp, Spiced Tomato Sauce, Rooftop Basil, Olives, Anchovies and Capers.  They also have many gluten-free and vegan options available.
My husband tried a Royal York Artisan Pizza.  He’s a total meat-lover so Meat Lovers Pizza it was.
An Artisan 12” pizza, made Fresh to Order in House, loaded with Mild Sausage, Ham, Bacon, and Pepperoni with Ontario Buffalo Mozzarella Cheese.
Both dishes were scrumptious with perfect portion sizes.

The Linguini Putanesca was delectable with a good amount of giant tiger shrimp and the crisp, buttery bread with it was so amazing.  I would order a whole plate of just the bread alone next time — that’s how good it was!
The Pizza dough was exquisite jam-packed with toppings and cheese! Very filling and well worth the cost given the amount they put into it.
Our dinner was completely satisfying and we were left with full stomachs and smiles.

Had we an additional day and more time, I would have tried our their Afternoon High Tea.
Tea is served in fine china along with sandwiches and pastries on Saturdays and Sundays in the Library Bar. How nice! Tea time also includes a chance to explore the hotel’s famous rooftop herb garden and bee apiary 14 stories above ground.

We did not have to worry about going back to the Concierge desk to check-out, everything was taken care of and any concurred costs were charged directly to your credit card — the bill was slipped under the door in the morning so that we were able to see exactly what would be charged.
On top of that, when calling to have our vehicle ready for us, they advised us that one of our tires was actually flat (we had low tire pressure on the way to the hotel so this was not the fault of the hotel’s), and they offered to pump it for us.
When we exited to see our vehicle, the attendant was taking it upon himself to manually pump our tire until it was safe enough for us to head over to a nearby station to get it fixed.
Apparently we had a flat thanks to a nail.
I’d say he went above and beyond to help us out. Another impressive act from the staff at the Fairmont Royal York.

Overall, my stay at the Fairmont Royal York was definitely a pleasant one.
Everything exceeded our expectations with the exception of a few pieces of chocolate left on the floors of our hotel room carpet (may have been missed when being cleaned) but that obviously did not affect our experience.
Not only did we receive superior treatment throughout our entire stay but we also felt relaxed, recharged and ready to take on the week ahead.
The only problem I had was that it was not long enough!

Some Fun Facts About The Fairmont Royal York Hotel:

Host to Royal Family, Presidents, Celebrities and… Ghosts? I’d say that makes for a very interesting stay, don’t you think?

If you’re looking for a beautiful place to call home for the night or a weekend away, expect nothing but royal treatment at the Fairmont Royal York.

For more information about The Fairmont Royal York Hotel, visit them online at: http://www.fairmont.com/royal-york-toronto.

14 Comments on The Royal Treatment at The Fairmont Royal York