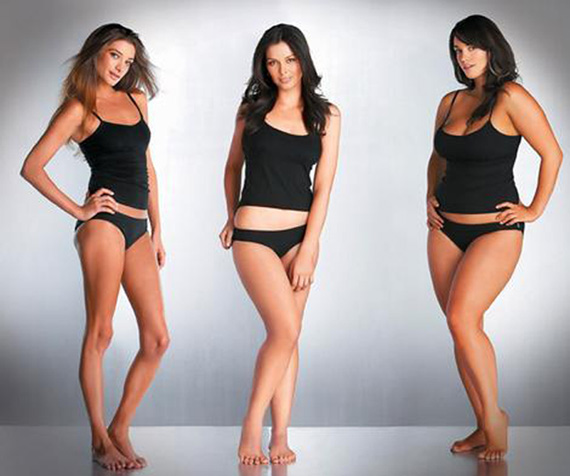 Three women, sizes 6, 10 and 14: in an online survey, men favoured a fuller figure
Okay Ladies (that are obsessing over weight!), this is a must-read.
Share this with all the women that you care about in your life that needs some of what I call a “High Calorie Confidence Booster Shake.“
There has been a survey when it comes to women and the vast majority of men prefer them well rounded.
It seems their ideal girlfriends are pneumatic, not flat-tyred. They’d rather negotiate sweeping curves than sharp shoulders.
They like women buxom, bosomy and bountiful.
Surprised?
According to the figures, the jury is in: men will choose a Rubenesque size 14 over a more slender size 6 when it comes to their ideal woman.
Admittedly, the science could be seen as somewhat superficial.
It is based on an online survey — not the most accurate means of obtaining information — of 60,000 men across the UK & America conducted by FHM Magazine.
The mag found that when shown pictures of three bikini-clad models, four out of five men said they were more attracted to the size 10 and size 14 models than the model who was a slimmer size 6.
The majority of votes went to the size 10 woman, with 41% saying that she had the body shape of their “ideal girlfriend”. Almost as many men voted for the Nigella Lawson-esque size 14 model.
“A piddling 20% of readers selected our size eight model pictured as their ideal girl-physique,” wrote FHMeditor Ben Smithurst.
“Which proves one thing, ladies: crack a beer, hoe into a hamburger and we’ll love you just as much.”
Okay, I think not. That may have been a joke but the most important thing for us as women is to maintain a healthy diet. Not just for our waistlines and being able to fit into that adorable dress you saw the other day, but most importantly for our health and overall well-being.
Body image experts take a less superficial view of the so-called research, but admit that it carries some, well, weight.
Professor Marika Tiggemann from Flinders University said that the results supported academic research on the topic. “We find women want to be thinner than what men find attractive,” she said. “Men’s idea of what is ‘thin’ is larger than that of women. Unfortunately, a lot of people think being thin demonstrates being in control or being disciplined, while being fat is a sign you’re weak.”
The editor of women’s magazine Cleo, Nedahl Stelio, said that most women did not diet for men but for other women.
“Most men I know would go for more boob over thinner thighs, but women, by nature, are competitive with other women,” Stelio said.
“And if the society and celebrity ideal is thin, that’s what she’s going to aspire to, just to get one up on other women.”
However, such surveys were far more damaging to women than they were helpful, according to Julie Thomson, general manager of eating disorders and body image campaigners the Butterfly Foundation.
“It objectifies women and it still is perpetuating this ideal that men do look at women externally only,” Ms Thomson said.
“There is just far too much importance placed on size when you should be looking at a whole range of other aspects.
“From our perspective as an eating disorder foundation, those sorts of surveys are an issue because they are centred around judging people based on what size they are and it is a really unhealthy way to judge or view people.”
She said that women embarked on extreme diets or developed eating disorders for a number of reasons, and it was oversimplistic to attribute such behaviour to a bid to appeal to the opposite sex.
“People develop eating disorders for a wide variety of reasons, including low self-esteem and family history of depressive illness,” she said.
“It is very, very complex and it is certainly not just brought about because some people desire to be thin in some sort of effort to attract men.”
So, what are your thoughts on this?
Speaking as a woman of “average” size, with a little extra junk in the trunk, who came from a size 0 (literally), I honestly could care less what any woman or man could think of me. But then again, I’m saying this now because I’m no longer single and have a child that gets my undivided attention.
I was raised in a family (and culture) where women are suppose to be less than a size 8 to be considered attractive.  Terrible, huh? And also, what makes it even worse is that unfortunately in my culture, tact is sorta-kinda on the back burner. People (especially family/friends) will say whatever is on their mind. “Oh, you’ve gained some weight.” or my “favourite” during pregnancy: “Don’t eat too much. It’s hard to lose that weight after the baby is born.”
But let’s be even more honest, yes, no matter who you are, you will care about how others look at you.
And that’s the truth.
Whether that be your spouse, your child, your mother, your best friend, your employer…
we will always care.
Bottom line: Take care of yourself. For your family, your children, and most importantly for you.
If you feel great about yourself – good for you! It’s harder to gain confidence than lose weight. 😉
Because really, that’s all that matters.
Credits: www.theage.com.au, FHM.com

1 Comment on The Skinny on Sizes: What Men really want